I belong to the Northwest Collage Society (NWCS) and am a fairly new member (for the second time!).  I belonged years ago, life took a different turn, and I wound up letting my membership run out.  The NWCS recently teamed up with The Cancer LifeLine Center out of Seattle, WA.  Members there wrote poems and asked the NWCS if their members would be interested in creating work to go along with those poems.  Both would be highlighted at a Show, opening this evening, April 11th, at the Dorothy S. O'Brien Center in Seattle, WA..

I chose two poems and did two corresponding pieces.  I received a call Saturday from one of the NWCS members telling me that one of the pieces had been chosen to receive a Merit Award.  I was delighted of course, but interestingly, when she said I had won an award, I immediately pictured in my mind the one that didn't win the award thinking that had to be the 'one that won'.  It just goes to show how, as Artists, we so often prejudge our work only to find the buying public has a totally different view and/or interpretation.    I will show both below, along with the corresponding Poems and let you decide what you think.  I do have to apologize because the photo of 'Gift' is a little out of balance.  I scanned it rather than photo it (and I'm not sure why I did that!?) so it's a little cattywampus.  It actually is a 10" x 10" square.  'Kiss' is 12" x 12". 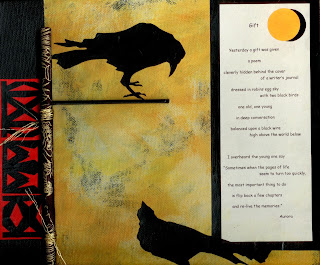 Yesterday a Gift was given
a Poem
cleverly hidden behind the cover of a writer's journal
dressed in robins egg sky with two black birds
one old, one young
in deep conversation
balanced upon a black wire high above the world below

I overheard the young one say
"Sometimes when the pages of life seem to turn too quickly,
the most important thing to do
is flip back a few chapters
and re-live the memories 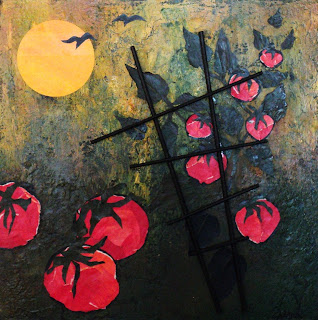 Trellised tomatoes
splay across the south side of the house,
get drunk on their own sweet juices,
stew in them,
grow so exuberantly when it rains
after dry days
skins split like opened zippers
and we, in an act
of compassion and forgiveness,
pluck them off the vine,
and offer them to each other's lips

Neither of these pieces are currently on my Website.  If you would like more information on the work, or the event, you can go to www.cancerlifeline.org 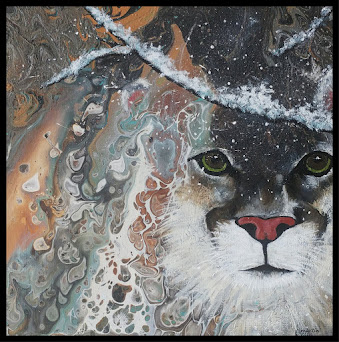